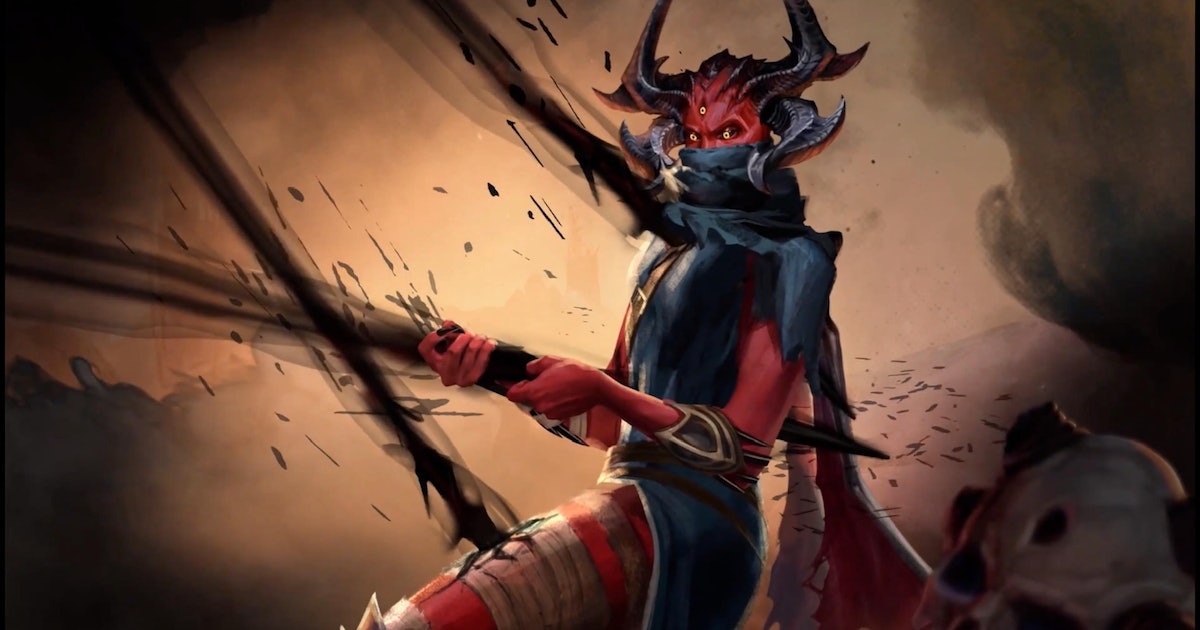 Metal: Hellsinger’s final showdown against the demon Red Judge is the epitome of unrivaled badassery.

Demonic revolvers fire on all cylinders as System of a Down’s eccentric Serj Tankian screams his head off in “No Tomorrow.” I pull the trigger to the rhythmic crash of the drum beat: one shot, another, then a third blast — all in sync with the song. Even the Red Judge’s fireballs fly in tandem with the intensity of the music. Before I know it, one last shot to the eye finishes the fell beast for good as the song comes to a triumphant climax.

Metal: Hellsinger maintains this level of intensity in virtually every encounter of the 5-hour adventure through Hell, delivering the most explosive and compelling music game — perhaps ever.

Metal: Hellsinger is a first-person shooter with a rhythmic twist: You must pull the trigger to the beat of the songs — and the entire soundtrack is intense metal music. You play as a demon called The Unknown who must descend into Hell to defeat the demon who stole your voice.

While the gameplay is tight and fluid, rivaling the likes of DOOM or Halo, the music steals the show with a heavy soundtrack that pulls no punches. Each song also features a prominent metal vocalist, adding flavor to the already remarkable score composed by Two Feathers.

Expect to hear the powerful voices of Trivium’s Matt Heafy, Jinjer’s Tatiana Shmayluk, Lamb of God’s Randy Blythe, and the aforementioned Serj Tankian from Grammy Award-winning band, System of a Down (among many others).

Much like other rhythm-based games, Metal: Hellsinger encourages you to reach for the highest score possible. If you fire at an enemy in time with the song, your combo increases, but if you’re off-tempo or take damage, your combo resets. You have to sink into a groove and follow the song’s pulse to raise your score. Scorechasers will probably have a hard time putting this game down; I know I did.

But you aren’t just encouraged to match the timing for a high score. As you raise your combo, more musical layers emerge — first starting with drum and bass, then guitars, and then the entire band comes in before the vocalist ties it all together. Since music is so intrinsically bound to this game’s DNA, it’s satisfying to see it work together with the gameplay in a harmonious way.

Hellsinger’s best moments are when you finally sync with the music’s timing, entering a zen-like flow, as each pull of the trigger functions as an extension of the song. A drum’s fast double-bass pedal has always been compared to the sound of a machine gun in metal music, and in Hellsinger, that comparison becomes a violent reality.

This is arguably the most important metal-themed video game ever released. Sure, Guitar Hero: Metallica did a fantastic job in 2009, but Metal: Hellsinger dives into the deep end, showcasing heavier music that may alienate a general audience. But it’s that commitment to heavy music that gives it such an authentic identity. The core audience will obsess over this game, but it’s also bound to capture new metal fans in the process.

Developers at The Outsiders clearly approached the game with a loving reverence for metal at large. Its soundtrack isn’t rock or even hard rock; it’s heavy, aggressive, in-your-face METAL, and it’s certainly not for everyone. Any individual track might prompt your grandmother to break out the holy water — and I absolutely adore it for that.

No matter how heavy, each song still incorporates an artful melody, whether it’s Heafy’s impressive high vocal range during the Incaustis stage; the catchy, spacy keyboard passage during Gehenna; or the shred-tastic guitar riffs during Acheron. There’s an ebb and flow to every song, giving you a little rest time in between the walls of chunky, low-tuned heaviness. (And yes, at times, it DJENTS.)

The sheer variety of metal music in Hellsinger is not just a testament to Two Feather’s skills as musicians, but also the abilities of the distinct vocalists. One moment, you’ll hear Arch Enemy’s Alissa White-Gluz belt out her famous operatic vocal lines, and the next, she quite literally sounds like Satan. It takes a lot of skill to write and perform this kind of music, so the onslaught of tracks feels deliciously oppressive.

The way the core mechanics reinforce the gameplay definitely feels clever, bolstered by the pitch-perfect pacing. Battles never get old as you face a variety of demons ranging from weak grunts to the shielded Cambions and the all-powerful Siege Behemoths. Each forces you to battle differently all while sticking to the incessant rhythm.

Siege Behemoths lunge from what feels like miles away, so The Unknown’s handy side-step ability is clutch. Pulling off a successful maneuver like this — especially to the beat of an ass-kicking metal song — is one of the most satisfying feelings in gaming you’ll have this year.

There’s also a wide variety of weapons at your disposal including the Terminus sword, the Persephone shotgun, and my personal favorite: the Hounds, a set of long-range hand cannons. Since each weapon has a different rate of fire, it takes some practice when learning how to shoot them in time with the songs, but figuring it out is part of the fun. It’s like learning a new instrument when you already know the basics of music — an instrument of death, that is. Certain weapons work better on specific enemy types, so you’re encouraged to experiment to learn the best times to use each of them.

Bosses bombard you with projectiles like what you’d see in a bullet hell game, but thanks to the way difficulty ramps up, it never feels insurmountable. Most of them look like clones, but unique abilities give the encounters some variety. For instance, The Doppelganger Aspect boss sends duplicates of itself onto the battlefield, so the only way to deal damage is to hit the “real” one. The Wheel Aspect encounter features a strong gravitational pull that can sweep you into the fiery depths of Hell if you aren’t careful. Every one of the game’s battles — whether they be against bosses or standard enemies — will leave you craving more.

There isn’t anything like Metal: Hellsinger. Diehard metal fans will no doubt fall in love with it instantly, but the overall experience is satisfying and compelling enough to serve as a gateway into the metal genre for newcomers. It perfectly embodies the passion, energy, and emotion that all metalheads share.

INVERSE VIDEO GAME REVIEW ETHOS: Every Inverse video game review answers two questions: Is this game worth your time? Are you getting what you pay for? We have no tolerance for endless fetch quests, clunky mechanics, or bugs that dilute the experience. We care deeply about a game’s design, world-building, character arcs, and storytelling come together. Inverse will never punch down, but we aren’t afraid to punch up. We love magic and science-fiction in equal measure, and as much as we love experiencing rich stories and worlds through games, we won’t ignore the real-world context in which those games are made.