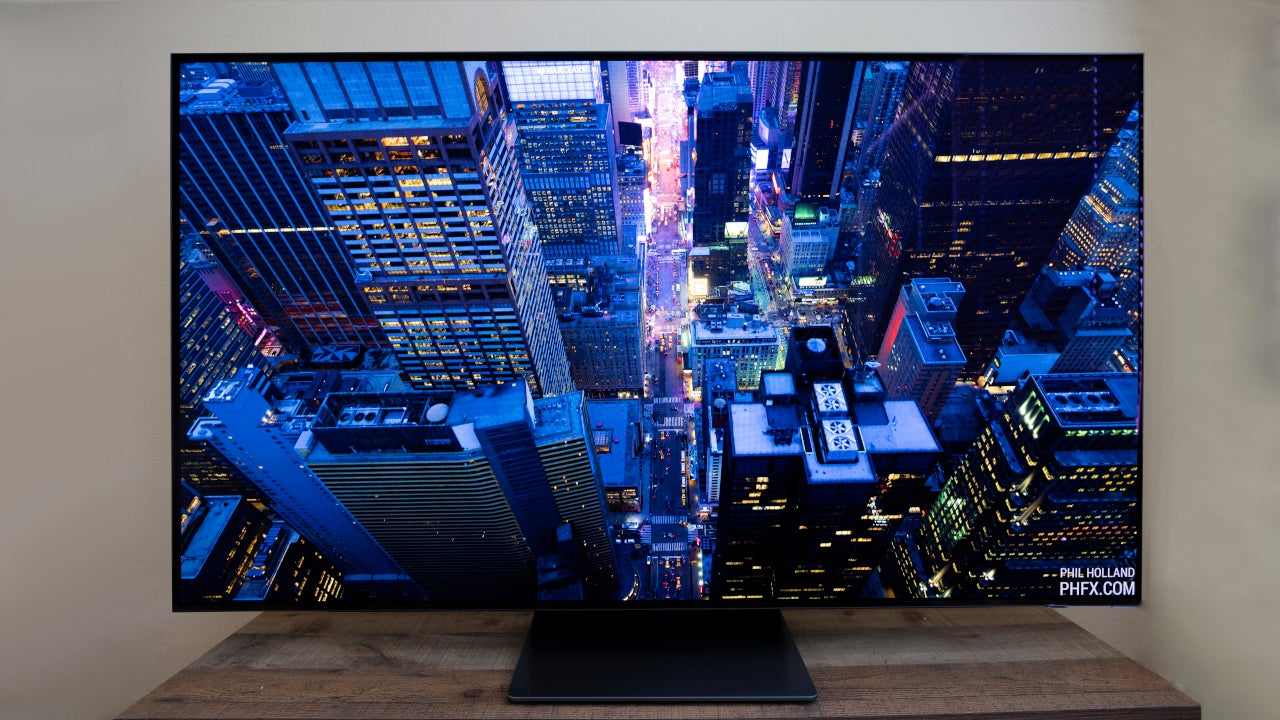 It’s hard to put into words just how good QD OLED – Samsung’s new and improved OLED technology – is compared to other 4K TV options. I love the LG C2 and I’ve had great experiences with mini LED technologies, but there is nothing out there right now that delivers the mix of brightness, color depth, color accuracy, and pixel response time like a QD OLED.

While Sony’s use of the panel is still my favorite, Samsung makes a solid case for itself by hitting the same high bar for picture quality and only charging you about half of Sony’s asking price.

OLED panels have spoiled me when it comes to design and the S95B is a perfect example of why: it looks great from any angle. From the front, its gorgeously thin panel and slim bezels make whatever you’re watching the star of the show. From the sides, the “brains” of the television are well contained in a small rectangular panel that also houses the ports.

On that note, the S95B features four HDMI ports that all support 4K at 120Hz (true HDMI 2.1 and one supports eARC), two USB ports, an optical port, cable coaxial, and Ethernet.

Samsung also did a great job with cable management in this model, and it is the first time I think I can say that about a Samsung display. Cables are fed neatly into a box that guides them behind the stand and out the bottom, where a nice plastic panel can fit over the top and seamlessly blends into the back of the display. When you’ve got it all set up and all your cables in place, all you see is the display and the rather nice stand.

Speaking of the stand, it’s not particularly heavy, unlike the behemoth that supports the Sony A95K, and has a unique locking mechanism that doesn’t use screws to attach to the back of the panel. It’s simple and sturdy, looks nice, and lifts the TV high enough off a media console to easily accommodate a good number of soundbars (which you’re going to want, more on that later).

The remote is identical to the one that comes with the QN90B that I also reviewed and I have the same things to say about it. It’s small but not too small, thin but not too thin, and has a solar charger on the back that eliminates the need for AA or AAA batteries, a feature I like quite a lot.

As I have mentioned before, this remote is perhaps too simple, since a lot of the buttons do double duty for functions and they’re not particularly easy to discern. If you’re tech savvy you’ll figure it out, but I bet my dad would struggle to figure out how to operate the television without some help. For example, to access the Game Bar – Samsung’s pretty great info panel for gaming features – you have to hold down the play/pause button.

I like that all the buttons, including the shortcut buttons, are the same color, which means the remote doesn’t look like it’s constantly advertising to me. My review model came with Samsung TV Plus, Netflix, Amazon Prime Video, and Disney+ shortcuts.

If you’ve read my reviews before, you will know I’m not a big fan of Samsung’s Tizen operating system and that remains the case here. Tizen is slow, constantly tries to autoplay content, and doesn’t react how you would expect it to in many circumstances.

For example, right out of the box the S95B did not have a gaming menu as an option at all, which struck me as odd considering how valuable direct access to the gaming cloud options is. But once I plugged in my PC, suddenly the gaming menu appeared. Also, after I plugged in either a PC or a PlayStation 5, Tizen would say that it was going to display that source and then instead dump me back at the home screen, forcing me to re-select that source from the menu.

As I mentioned in my QN90B review, Samsung by default will try to shove Samsung TV Plus down your throat at every opportunity. If you leave the remote idle for too long, it will start to autoplay the channel from the home screen. If you try and move it to somewhere else, it will try to autoplay that too. The only safe harbor I could find was leaving the remote over the “all apps” option, which blessed me with sweet silence.

Another issue I have with Tizen is the lack of picture options. The S95B only offers a choice between Dynamic, Standard, Movie, and Filmmaker modes for standard content and “Entertain” and “Graphic” for a connected PC. For all these settings, trying to fine-tune them beyond their defaults is quite limited, with just some very basic brightness, contrast, and tint options. The other QD OLED I’ve reviewed, the Sony A95K, provides a lot of options that make that display suitable for a wide range of tasks, while Samsung seems to just support basic TV watching. Honestly though, for most, that’s going to be okay.

The Samsung S95B doesn’t support Dolby Vision HDR, but it does support HDR10+. I can keep looking past this for now, but I feel like at a certain point, Samsung’s lack of Dolby Vision support is going to become a notable negative.

As I touched on above, the S95B brings the Game Bar in addition to the Game Menu, which provides a nice look at exactly what is being displayed when you’re using a console or PC. You can adjust input lag settings, display how many frames per second are currently being shown with on-screen content, as well as adjust HDR, variable refresh rate, screen ratio, and a few other game-specific settings.

It should be worth noting that when the S95B was brand new, there were multiple reports of issues with the software. From what I can tell, and based on my experience, those problems have all been resolved and the television is working fine now.

The Game Menu provides access to multiple cloud gaming options like Stadia, Xbox Game Cloud, and Nvidia GeForce Now, giving TV owners access to huge libraries of video games without having to own a console.

I tested this with Xbox Game Pass and was able to connect to my account and pick up Halo from right where I left off on my PC and do so with no connected hardware except an Xbox controller, which links with the TV directly and seamlessly.

While this is a nice feature, there are some limitations. Mainly, the quality suffers since it’s being streamed at a maximum 720p and a relatively low frame rate (I told Halo to target 60p but it didn’t feel like I was getting that). Compared to the gorgeous 4K signal I can get when plugged into my PC, the low-resolution is a pretty obvious downgrade, but it doesn’t really take away from the gaming experience all that much. I think that children especially would really love this feature and it’s great to see it here.

It should be noted that the Game Bar that I praised so much isn’t available in the Game Mode, instead it just shows some other games that can be played.

The S95B shines brightest when all the attention is put on this outstanding panel. QD OLED is a new technology that combines the benefits of great contrast, color, and pixel response time that you find with traditional OLED with a panel that can get brighter and uses less energy. I explain all the benefits of QD OLED in a guide you can read here, but in short, it’s the most impressive panel technology that I’ve ever seen.

Standard and HDR content looks outstanding on this panel to the point that I found myself audibly saying “wow” over and over again during testing. This panel is capable of displaying more colors than any other display you’ve ever laid eyes on and seeing that in person is really hard to put into words. It also gets very bright – more than 1,000 nits of peak brightness – which means it is able to overwhelm glare even in brightly lit rooms. If I had to nitpick, I think that greens are a little too saturated and I also noticed some minor stuttering of slow panning objects, but these are extremely minor quibbles to make against a panel that is overall just outstanding.

It’s not just my eyes either: the panel tested extremely well with 100% of sRGB, 94.6% of Adobe RGB, and 99.9% of the DCI-P3 color gamuts and an average Delta E of less than two – all of this was straight out of the box with the TV set to Filmmaker Mode.

While not quite as perfect as what I tested on the Sony A95K, the panel uniformity on the S95B was very good and in my standard nine-by-five test it scored within nominal tolerances across the board.

OLED is my favorite kind of panel to game on thanks to low pixel response time, great colors, and fast refresh rates, and that doesn’t change with the S95B. This panel is capable of 4K at up to 120Hz through HDMI 2.1 and because all four ports support this feature, you can connect a PlayStation, PC, and Xbox to it all at the same time and still have one more port for an eARC soundbar.

I tested this TV by playing Destiny 2, Halo Infinite, and Apex Legends, and all three games looked great, if not a bit over-juiced in HDR due to this panel’s propensity to push the greens a bit harder than I personally like. You can tune this though, and once you get the look to be what you personally enjoy, you’ll have basically nothing to complain about when it comes to gaming on any modern console or even a PC.

Not only can this TV do 4K at 120Hz, it also supports Variable Refresh Rate (VRR), FreeSync Premium, and auto low latency (ALLM). There really isn’t a lot else to say: gaming on the S95B is a fantastic experience.

As is the case with any television that has this little physical space for speakers, I don’t come in with high expectations for quality sound. But companies, Samsung included, are getting better at using this limited space and I have to admit the quality of the audio out of the S95B isn’t half bad. It gets plenty loud and while it doesn’t have much on the low end, it’s pretty okay.

I think you’re still going to want to get a soundbar or a sound system to produce the kind of theater-quality audio that should accompany the excellent picture quality that can be produced on this display, but I’ve certainly heard worse televisions.

There really is only one other television that can go toe-to-toe with the S95B and that’s the Sony A95K. Both use the same Samsung panel, but Sony’s processing and picture quality options make the panel do more there than can be found on the S95B.

But that said, you certainly pay for it. The A95K costs $4,000 (though I’ve seen it on sale for as low as $3,500) while the Samsung S95B costs $3,000 but is on sale for as little as $2,000. If money is no object, Sony is going to give you an overall better experience, but most will be perfectly happy with Samsung’s offering that comes in far cheaper.

One other thing worth mentioning is that I think the S95B is a much better television than the Samsung QN90B, which is weird since it has a better panel and can often be found for cheaper. If you’re going to buy a Samsung, buy the S95B.