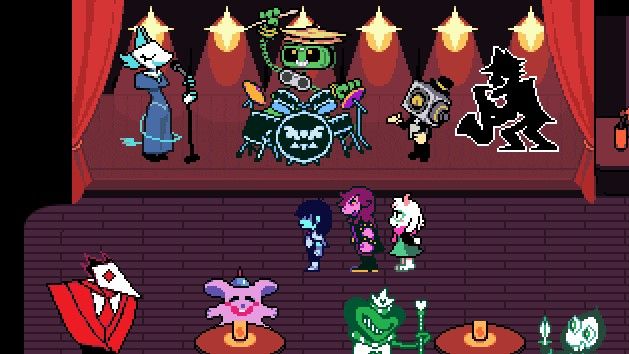 Today marks the seven-year anniversary of Undertale, a one-person project that was not only a love letter to the JRPGs of old but took their best ideas, twisted them around, and wrought something new and vital from them. As the much-missed Richard Cobbett wrote on his way to awarding it a stonking 91% (opens in new tab), Undertale “may or may not be the best RPG you play this year, but it’s certainly going to be one of the most worthwhile—as memorable as anything in, say, The Witcher 3, and every bit as worthy.”

Undertale’s not-a-sequel Deltarune (an anagram of Undertale) first broke cover in 2018, with a vibe very much in-line with what had gone before but a new episodic structure. Thanks to Undertale creator Toby Fox making a gajillion dollars from his wonderful game, he also decided to make Deltarune free until it’s more substantial: the first two chapters can be downloaded here, and are excellent.

Chapter 2 came out around a year ago, but since then there’s been little news. Now Fox has posted a status update on the game, confirming as he’d previously said that chapter 3 won’t be released this year, but offering a sneak peek on what the devs have been working on and general progress.

“Hard to believe it, but it’s already been around 1 year since Deltarune Chapter 2 was released,” writes Fox. “Even now there still seems to be a passionate fan base for what we put out, thanks in no small part to a disgusting man whose dialogue is probably closest to the way I talk in real life.”

The team is working on chapters 3, 4 and 5 simultaneously, though Fox says they’ve mainly made progress on 3 and 4. “Between 3, 4, and 5, we’ve already exceeded a chapter’s worth of bullets, cutscenes, and gimmicks. Not only that, but the next chapters had certain aspects that took a while to set up, and now that those things are in place, the development of the game is only going to get smoother and smoother!

“As always, I want this thing to come out the most out of anyone on the planet, so we’ll be doing our best to get it done.”

The post goes on to show some screens of the new features, as well as a lovely new BGM in the light world. There’s a glimpse of some new character rooms, a secret place called the Green Room, and what appears to be a dancing elf.

On release of Chapter 2, Fox said the next three chapters would release simultaneously, and come with a price for the whole package. It’s unclear whether that’s still the plan, because given this update it looks like 3 and 4 will be ready before 5. Fox does write that “you can’t spend any money yet”, so the next release may be the point where you finally have to fork over a few bucks for this (well worth it).

The “something special” that was previously teased is the Spamtom Sweepstakes, a charity auction that starts this Saturday at 12PM pacific time and runs for 24 hours over at Deltarune.com. “Don’t worry,” writes Fox, “it will have content for Spamton Lovers and Haters alike!” The money raised will be split between the charity Child’s Play and Pakistan Children’s Relief, the latter of which is currently working to bring aid to those affected by the terrible flooding over there.