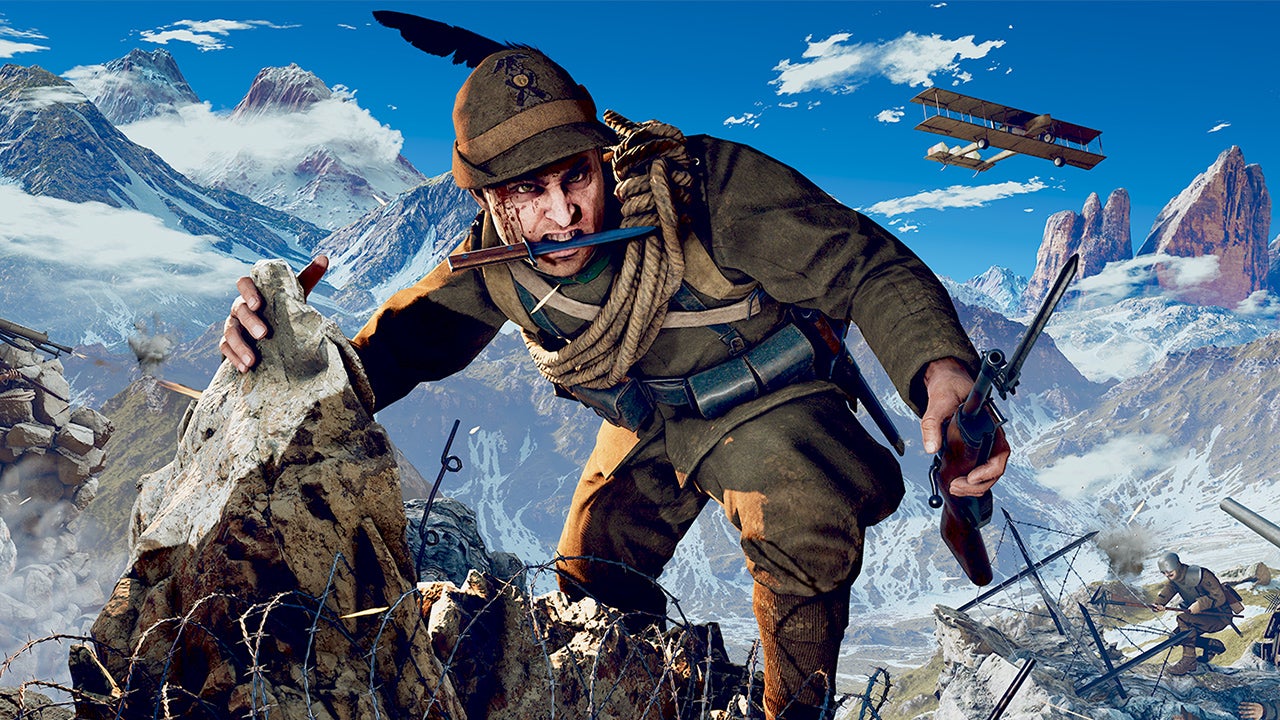 There are historical first-person shooters that attempt to capture the precise texture of their era — the limits of the technology, the archaic military traditions, the hierarchy of command. Then there’s Isonzo, a World War One shooter where you can drink from a canteen to briefly erase your stamina threshold, which allows you to sprint around the rugged warzones of Italy with reckless abandon. A comrade on your flank might bolster those efforts by blowing a whistle to inspire his compatriots, making them resilient to the hail of gunfire pouring out of the regiments encamped across the valley. This playful approach to the Great War is soaked with twitchy trigger-pulls, game-altering bombing runs, and goofy, video game-y perks, makes Isonzo approachable to even the most casual participants. It’s a philosophy that fills it with moments of bright, airy fun, even if some of its turn-of-the-century flourishes feel like window dressing for what is, at its core, a fairly standard FPS.

Isonzo is the third World War One game developed by Dutch studio Blackmill Games. The previous two, Verdun and Tannenberg, document the action on the Western and Eastern fronts, respectively. Isonzo shifts the action to the warmer climates of southern Europe — the Adriatic highlands, specifically — which was the site of several clashes between the Kingdom of Italy and the Austro-Hungarian Empire.

Like both of the previous installments, Isonzo is played across large-scale, Battlefield-style engagements over a constellation of contested control points. Blackmill has done a great job of beautifying the apocalyptic dregs of the combat. The granite Dolomites pierce the sky above our lowly soldiers, while crystal blue rivers babble over vertigo-inducing cliff sides. Yes, we might be risking life and limb as we knife through the dusty trenches and rocky outcroppings of the terrain, but Isonzo still manages to inspire a swashbuckling sense of intrepid adventure — a touch of Old Hollywood glamor. That’s saying something, considering the many grim ends your soldiers will meet.

Isonzo has exactly one game mode and follows a fairly conventional format.

Isonzo has exactly one game mode and follows a fairly conventional format: You’ll spawn in your territory, rush to the front lines, and attempt to either overcome the entrenched forces of your adversaries, or stave off the surge of troops trying to rout your battalions, depending if you’re on offense or defense. With a full complement of 48 players – which is currently easy to come by – Isonzo captures the mayhem of mechanized warfare: rifle shells zing past your helmet, mortars crack open the cliffs, trenches are conquered with bayonet thrusts. This game is at its best when you and your company scramble up a hill through plumes of mustard gas and sparks of machine gun fire, to finally tip the scales and gain a foothold in No Man’s Land.

But unlike other, more simulation-heavy World War One games, Isonzo is very much a modern first-person shooter that combines the brutal aesthetics of the period with a whole slew of Call of Duty-ish design ideas. The weapons are period appropriate — single-shot rifles with lengthy reload times are the norm — but your soldier can equip battle perks, as if they’re dropping into Verdansk, that might improve their bandaging speed or reduce their weapon sway. Even better, a pair of binoculars allows you to place waypoints over the heads of your rival soldiers, while green dots hover on your friendlies, as if the conscripts of 1917 suddenly had access to 21st-century augmented reality.

These wrinkles make Isonzo easy to pick up for those who haven’t logged time in an Arma squad, but they do make it a little less authentic and immersive than some of its counterparts. In Beyond The Wire, another recent Great War game, the realism of the conflict is reproduced in exacting detail, to the point that you need to screw on your own bayonet. Isonzo, meanwhile, celebrates every one of your headshots with a scorecard in the bottom of the screen, like you just tagged someone with a Bullpup on De_Dust. That keeps the pace of the action up, while also making the kills feel less meaningful. After a while you might forget that you’re playing a World War One game at all.

Blackmill to lets us feel righteously powerful on the battlefield.

But that thematic flexibility has allowed Blackmill to let us feel righteously powerful on the battlefield. It is always possible to dominate the competition in Isonzo; you’re never helpless grist in a cold, continent-spanning death machine. Players who want to stay away from the action as much as possible are also able to find a role. Most of the six classes are designed for firefights, but my favorite ended up being the Officer, who is able to use a telephone behind friendly lines to summon the full brunt of 20th-century mechanization. You bring up a map of the warzone and paint a strafing run across the parchment; moments later, biplanes materialize on the horizon to drop payloads of hellfire and rack up your score. (The easiest comparison would be the Call of Duty kill-streaks, except that these abilities can only be used by one class, and from a fixed location.) It’s the perfect push-pull — Officers exchange their manpower on the control points to affect the tide of battle by calling in big, game-swinging cooldowns — which makes Isonzo a lot less brainless than a pure war of attrition.

The other classes aren’t quite as unconventional as the Officer, but Blackmill still packs a few wrinkles in each of them to separate them from baseline grunts. The Engineer class has access to a rotary wheel filled with rudimentary armaments — sandbags, sniper shields, and so on — which add some obstacles to the chokepoints. The Mountaineer brandishes a brass bugle that magically increases the firing rate of soldiers in their aura, and the Assault class are the only ones who can bring fully-automatic machine guns to the party. They all fit their role nicely, and in concert, you can devise a complex battle-plan full of suppressing fire and cloaking smoke. After all, it’s always important to consider the position of your teammates in Isonzo, for that is the only way to avoid dropping a mortar directly on top of them.

Similarly, Isonzo litters its maps with spawn points to fabricate and barbed wire to cut, which changes the ebb and flow of the action, making it less like a static war of attrition. These additions give it more of a strategic bite, but at the end of the day, most of your time is going to be spent crouched in an earthen barricade, firing your rifle at an infinite supply of overwhelmed foot soldiers. That is how these wars are won and lost, and unfortunately, it doesn’t take long for those orders to wear thin.

That’s Isonzo’s gnawing issue: I never felt truly transported into the heritage it so clearly wants to honor. Here is a loud, pulpy, gorgeous World War One game on the surface, with a straightforward first-person shooter simmering under the hood. Isonzo proudly bears the name of a decisive battle in military history, but I didn’t quite feel the weight of its setting. Instead, I was mostly looking at my kill counter, to make sure that my shots were hitting their target.