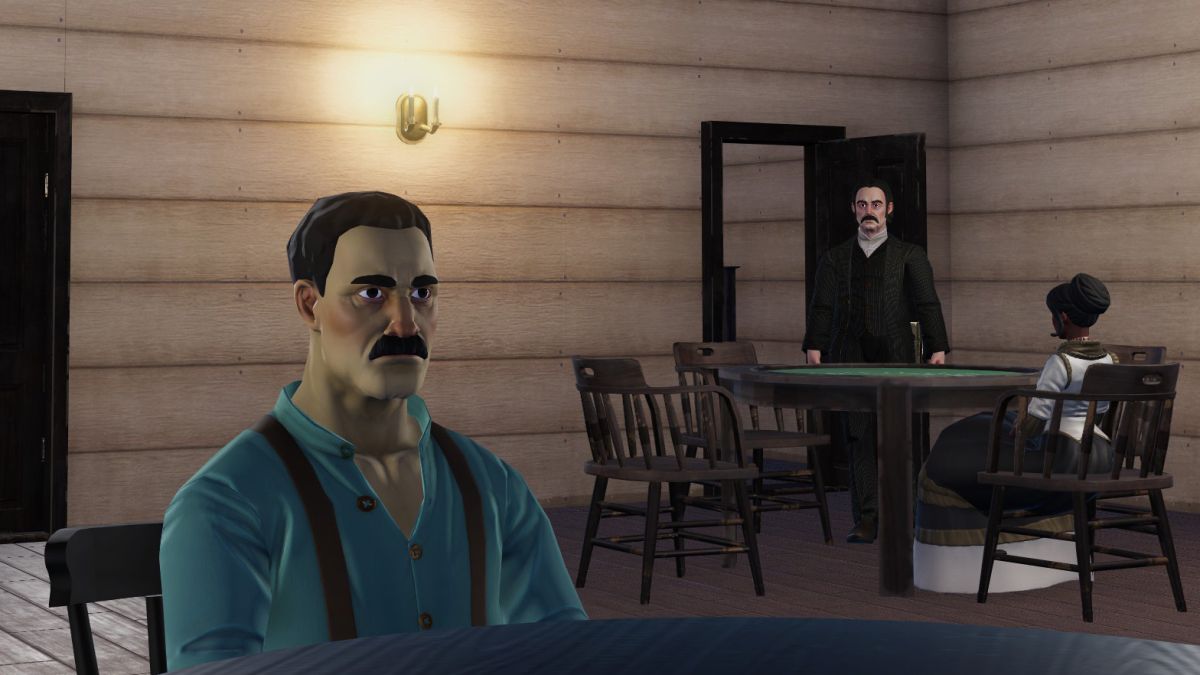 I’ve played plenty of Western games—Red Dead Redemption 2, Call of Juarez: Gunslinger, Westerado: Double Barreled—typically casting myself as a steely-eyed gunslinger capable of mowing down outlaws and lawmen alike with a flurry of bullets from my shining six-shooters.

But is that really me? If I were really in the Old West, would I be the deadliest, bravest cowboy in history? Doubtful. I’d probably be the portly saloonkeeper, wincing and fretting whenever a brawl breaks out around the poker table and far more likely to say the words “I ain’t lookin’ fer no trouble, Mister!” then I am to say “Draw, Pilgrim.”

Deadwater Saloon is giving me the chance to bring that tubby coward to life. There’s a bit of a Sims feel to the saloon management sim: I peer down into my tavern from a top-down view, I buy and arrange furniture, shelving, and decorations, and I pick attributes for my bald, portly character, Toast Parker. (Thanks to the sim’s excellent random name generator for that moniker.) Those attributes are extensive, too, with names like “savoir faire,” “seduction,” and “litigiousness” which provide bonuses that will come into play during random events that crop up, like when I need to befriend someone, have sex with them, or sue the crap out of them.

The sim gets off to a slow start: the town initially only consists of the saloon, and all I can do is hire a bartender and a cook, start researching recipes for food and drinks, and wait for someone to actually walk in and order. But little by little, the town starts to grow and customers begin trickling in. A trapper opens a shop next door so I can buy different kinds of meat to unlock new recipes. A brawl breaks out which chases my customers away and I have to hire a bouncer. A customer complains that I don’t have any prostitutes, but I can’t find any to hire so I add a piano and hire someone to play it. Music is just as good as sex, right? Here’s hoping.

But apart from the fact that I’m regularly spending more in wages and supplies than I’m earning from customers, there’s a bigger problem: Stress. Toast Parker is more of a nervous wreck than even I would be in the Old West, and the only ways to lower his stress is by eating, drinking, smoking, reading, or having sex. Since I have no books or tobacco, and I haven’t found any sex workers to hire, I can only calm myself by shoveling food in my face and getting drunk. It doesn’t lower my stress all that much, though, and it quickly climbs back up within a couple days.

That’s when the opium den moves in next door. Since I’m looking for any way to increase my revenue I promptly buy 200 hits of the drug to sell in my saloon, plus a knife to make my bouncer a little more formidable. A moment after I’ve closed the deal, the opium den owner just hands me another 200 doses of opium for free. Now I’m positively swimming in opium. My saloon has more of it than I have food and alcohol. Wait, am I running an opium den now, too?

On the plus side, the opium sells better than the booze and meals I’m serving, but it’s still not enough to put me in the black, budget-wise. After adding a card table I can’t even afford to hire a dealer to run it. In fact, I’m about to completely run out of money so I take out a loan from the only place in town offering it, which also happens to be the opium den. I hire a card dealer, add more tables and chairs on the second floor of the saloon so I can squeeze in more customers, and raise the prices of everything on the menu… but I’m still losing money month over month.

It wasn’t my plan to become an outlaw, but I feel like it’s time to try to rob someone, and I choose the only person in town who seems to have money: the opium den owner. It occurs to me something is really going wrong for Ol’ Toast. I’m buying opium, I’m selling opium, I’m getting free opium, I’m taking loans from an opium dealer and now I’m going to rob him. Ah, hell with it, I might as well smoke opium, too. It lowers my stress levels more than food and drink, so I start doing it on a daily basis. I can’t see anything going wrong with that.

And the robbery works! With only a 26% chance of success, I manage to steal $82 from the opium den, though I was hoping it would be much more (ideally, enough to cover the amount of the loan). The downside is now the opium dealer and his entire family hates me, and the suspicion level of the entire town has risen to +300, which I assume means a Sheriff will be setting up shop here sooner rather than later. “My opium saloon might be in peril,” I think to myself while smoking my third opium pipe of the day.

Well, I’m addicted to opium and committing crimes, and a gang of outlaws just stopped by the saloon to threaten me, so it’s time to buy some guns, right? Luckily a blacksmith has set up shop so I buy three Colt revolvers, keeping one for myself and distributing the other two to my bouncers. A bakery also opens, letting me buy grain and start researching new recipes to serve in the saloon like biscuits, pies, and cakes, allowing me the brief opportunity to do some actual saloon business. But my stress level keeps climbing and I keep smoking opium to lower it. I also keep failing random events: trying to make a cranky customer laugh, trying to win someone over with a great meal, flirting with a woman from town, even simply nodding hello to an acquaintance.

Nodding! I failed a nodding roll and my nod was so bad the person laughed and lowered their opinion of me. I’m going to be replaying that embarrassing moment in my head all night as I plunge into yet another opium haze.

Turns out I’m good at something, though. An event pops up as a customer suddenly draws a gun and attempts to rob me. My savoir faire only gives me a 10% chance of talking my way out of it, and my seduction skill only shows a 7% chance of convincing him to fuck me right there on the floor of the saloon. I do, however, have a gun and two armed bouncers. I go for the violent option and shoot the robber in the face. Problem solved.

My stress level hits the ceiling again a few days later and Toast Parker starts thinking about killing himself. Don’t worry, I handle it—I do four straight hits of opium—before a prompt tells me I have a nemesis in town and that person is, and I quote, “shit-talking” me. Well, the person in town who hates me the most is the opium dealer because I robbed him, though you’d think some of that anger would have dissipated because I’m obviously his best customer and salesman. Anyway, since he’s being a dick, and since it’s only a matter of time before a Sheriff appears in town, and since the only thing I’ve done properly in the past week was blow a man’s brains out, I decide to go ahead and murder the opium kingpin. Maybe it’ll make me feel better.

I forgot to factor in that I’m so incompetent I can’t even pull off a friendly nod, so naturally I fail my murder roll, despite a 41% change of a successful garotting. (Why didn’t you use your gun, Toast? It’s literally the only thing you’ve got going for you.) The opium dealer’s opinion of me drops to -100, and only because it’s impossible to be any lower. On the plus side, I do successfully die by my own hand the following day. Stress, again. Toast just couldn’t take it anymore. Sometimes, there isn’t enough opium to make everything better.

Well. That was something! I’m not sure how I so quickly went from a cowardly yet enterprising bartender to a drug addict and attempted murderer. I guess that’s just the Old West for you. If you’d like to try your hand at being a saloon manager or dope fiend, you’ll find Deadwater Saloon here on Steam (opens in new tab).