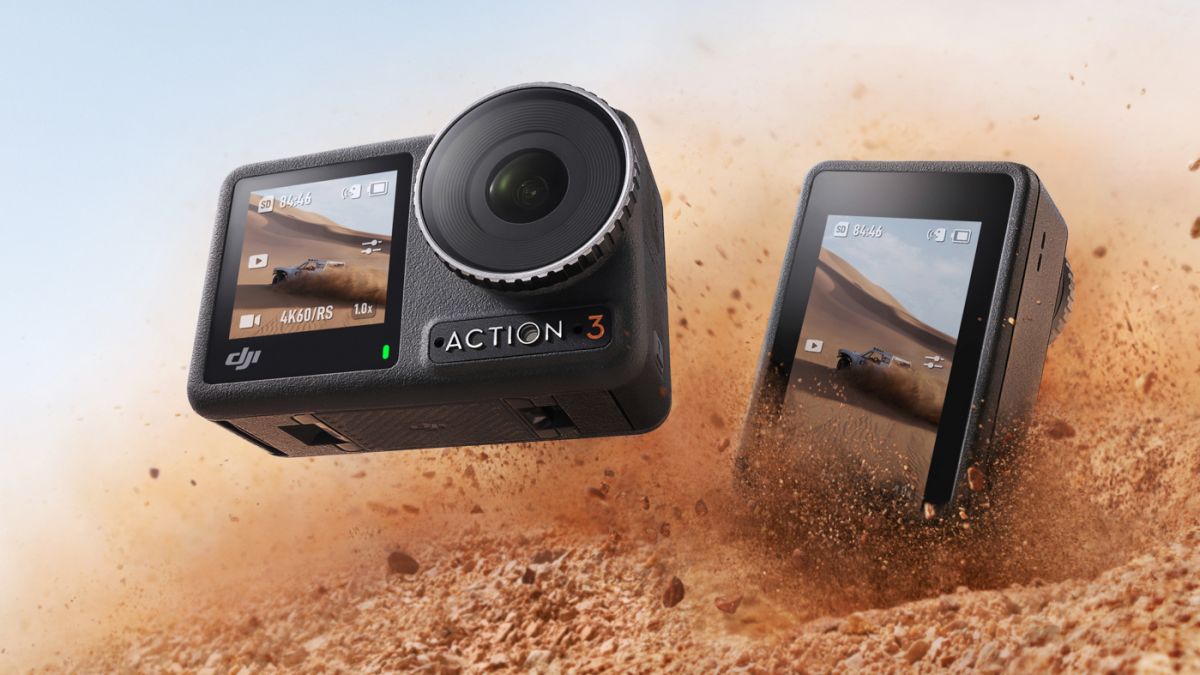 DJI have just announced their new Osmo Action 3 action camera. The new 4K camera comes less than a year after the Action 2 launch but adopts an entirely different housing; a more familiar all-in one design.

The more rugged design targets vloggers and streamers with its dual touchscreens. It is the first action camera with dual touchscreens (not counting DJI’s own Action 2 when the secondary module was attached. The lens is a full 155˚ field of view (FOV), equivalent to 12.7mm).

DJI has clearly listened to the mixed response to the Action 2 (opens in new tab), and here the camera is waterproof to a depth of 16m (52ft) without a housing. The screens and lens are all protected with Corning Gorilla Class giving a 1.5m drop resistance.

A key improvement of the Osmo Action 3 is the battery, a 1770 mAh capable of operating in extreme temperatures as low as -20˚C to 45˚C (-4˚F to 113˚C) is included as standard. This clearly takes aim at GoPro who charges extra for an ‘Enduro’ battery.

Coming from the Action 2, which had batteries in different modules, things are also a lot easier to manage. The batteries are fast-charge capable, up to 80% in 18 minutes or full in 50. The battery can shoot for an impressive leading 160 minutes, and a Multifunctional Battery Case can protect and charge up to 3 (and has space for two spare microSD cards).

DJI has also followed their recent Mini 3 Pro drone (opens in new tab) by facilitating vertical shooting. A quick release frame has a quick magnetically-assisted clip into which the camera can easily be placed in both formats.

The camera features triple microphones with noise cancellation, a sensor to adjust white balance as it goes in and out of water, voice control and voice prompts. Manual and Pro functions are on offer too, including D-Cinelike for an editing-friendly flat video profile.

The 1/1.7-inch sensor can capture 4K video with DJI’s ‘RockSteady’ or ‘HorizonBalancing’ EIS at up to 120fps, and 1080p at up to 240fps. There is also the vlogging-friendly ‘HorizonSteady’ mode, first seen on the Action 2, which lets you turn the camera a full 360˚ without losing a steady horizon (when shooting 2.7K and below).

Video is captured at up to 4K 120fps or 1080P 240fps; not as high as the mark set by the GoPro Hero10 which can rise to 5.3K 60fps, but the camera is cheaper to buy and doesn’t push a cloud subscription. DJI do provide a downloading and editing app, Mimo, but it is free to use.

Thanks to an early lend from DJI, you can check our full DJI Osmo Action 3 review  (opens in new tab)

The Action 3 follows so fast on the heels of its predecessor that in our review our point of comparison was the same GoPro model. It is, however, a very busy day for action cameras. GoPro has been teasing an announcement for a while and it will be made just an hour after DJI’s. Check our coverage of the GoPro news event (opens in new tab).