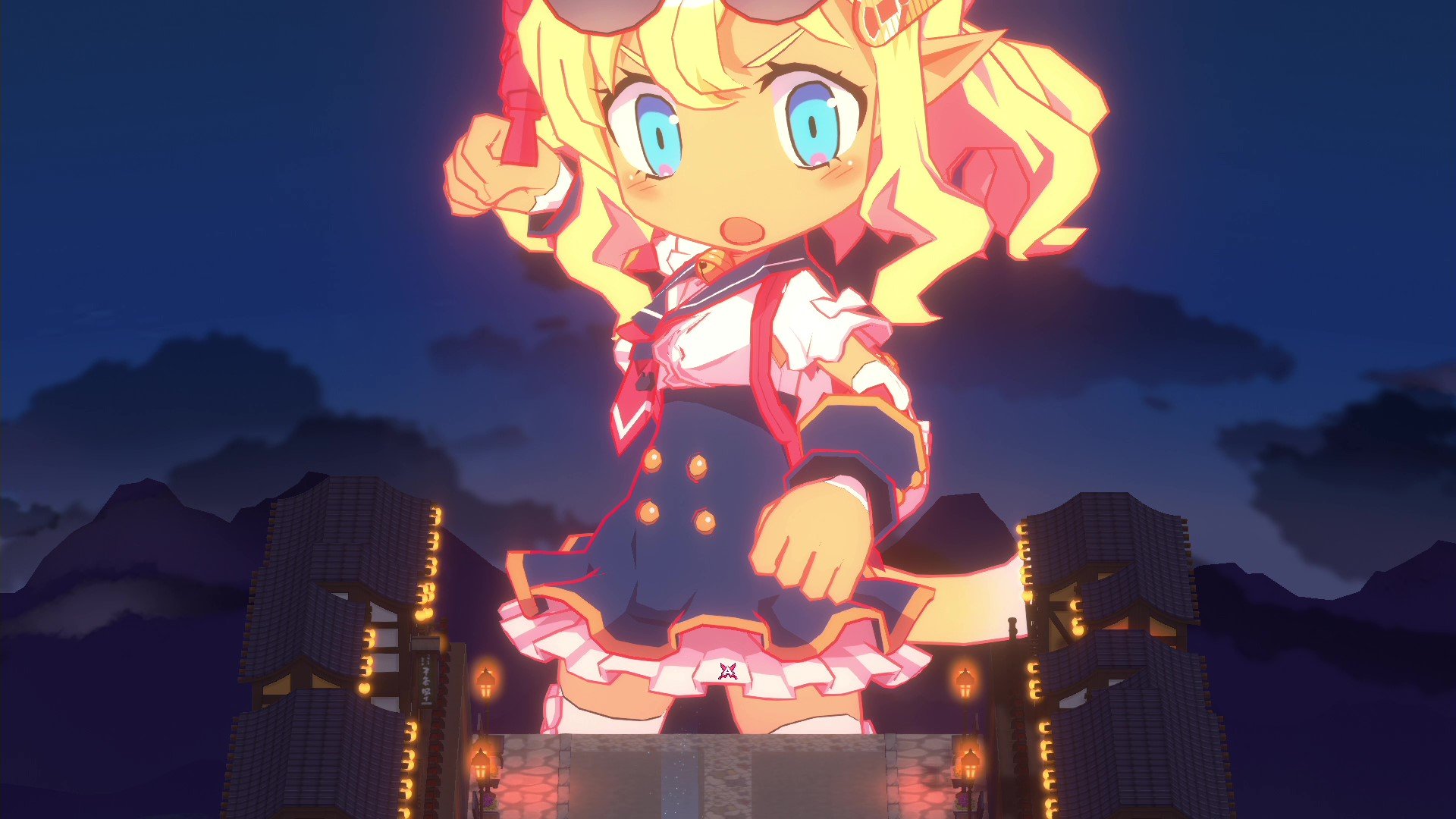 Get the details below.

■ The “Oddballs” of the Netherworld Wreak havoc All Over Hinomoto

The story of Disgaea 7 is set in a Japanese style netherworld called “Hinomoto Netherworld Cluster,” which has been taken away its “Bushido” and is in shambles by the hands of demon admiral Opener.

The odd duo of lone samurai named Fuji and a Hinomoto otaku girl named Piririka set out on a journey spanning all of Hinomoto to obtain the legendary weapons known as the “Seven Blades of Origin” in order to defeat the corrupt Oedo Shogunate.

Can Fuji, Pirika, and the odd balls they meet along the way regain the honorable Hinomoto once more…?

The story progresses by forming an army with the unique allies you meet on your journey, training them, and going on quests to various locations in the netherworld.

Systems that enable you to freely develop your characters like “weapon skills,” “Item World,” and “Demonic Intelligence”—a feature useful for side activities—and many of Disgaea‘s other signature features are also back!

Enjoy creating characters and armies of your own concept, and battles where the damage numbers will go into the tens of millions!

■ 1. Plow Through Enemies with Groundbreaking Tactics!

Dodeka MAX is an extraordinary tactic that the characters will enlarge so much that they’ll not even fit inside the stage, and the battles become exponential.

While Dodeka MAXing, you can attack anywhere on the stage! Also, when enlarged s special ability called “Dobility” will activate. Using Dobilities like “damage boost 20%” “heal 20% HP after each turn” will enable you to progress battles smoother.

Enjoy battles on a huge scale with ultra enlarged characters that uses overwhelming power and size to blow everything away!

Enemies will use Dodeka MAX as well! You might find yourself in a pinch when encountering tough foe.

Two characters on your team and two enemies can Dodeka MAX at one time, so use it to even the battlefield! The timing of when and who you chose to Dodeka MAX will affect the tide of battle.

■ 2. Build the Most Badass Army Using Anything You Can

Find your favorite characters from the biggest roster in the series. Other than unique characters like Fuji, many generic characters whose classes the player can edit will appear as well!

Understand the characteristics of each weapon, and use them to their limits!

The seven weapon types will let you unlock powerful weapon specific skills by continuing to use them. Situations where which weapon skills are most effective differ by types, such as swords having a wide range of attack and axes that have the strongest melee attack against a single target.

Train your army wisely with which character to be able to use which weapon!

From borrowed muscles and amulets filled with memories, Disgaea has many crazy items. Disgaea has a variety of equippable items other than weapons.

Each equippable item is unique and boosts your stats depending on what type it is. If you feel frail and need an HP boost, try equipping “muscles”; when you want to travel great distances, equip “shoes.” Equip each character different items according to their traits.

Strengthen your items by exploring dungeons that change every time you enter!

The series signature item leveling system “Item World” is back again in Disgaea 7. Strengthen your items inside a random dungeon that changes appearance every time you enter.

You will be able to enjoy clearing a different stage every time since the enemies and structure will change with each entry. Where there are weak weapons there will be weak enemies, and where there are strong weapons, strong enemies. You’ll need to strategize accordingly or else you may end up wiping out your whole army! Enjoy a tough challenge a little different from normal stages!

The ultimate weapon awaits you on the other side of the item realm.

When clearing an item realm, the item can item reincarnate! Reincarnated items will retain the traits of its past as well as use new abilities.
Swords that can use spear skills, bows that make you faster, the combination of abilities are endless!

Reincarnate your weapons again and again to create the most evil weapon!

It doesn’t matter what you are good or bad at, as long as there is love! Even if your favorite characters has weak stats, or has skills that do not fit in with your army, try leveling them up.

Reincarnating them will let you carry its stats and skills, while leveling them up from level 1, and enable you to create a character who’ll be useful someday.

In Disgaea, where anything goes, you can make your character become as strong as you wish as long as you have love! Toss them into epic battles with out thinking too much about following a guide to develop your characters!

Combine the forces of the most badass characters and create your own army!

In Disgaea, you can create your one of a kind army from all the characters you’ve developed. Of course you can build a “girls-only” or “Japanese-esque” army, but also a “strongest weak character army” or a “one-man army” that is super strong!

You can enjoy Disgaea even more if you choose a concept for your army!

■ 3. Breath Life into Your Characters with Artificial Intelligence

It will be of course useful in leveling up your characters, but also there is a ranked battle mode using “Demonic Intelligence,” so be sure to set different artificial intelligence for different occasions.

Maybe you can even find an artificial intelligence setting that can clear a stage in one turn, or win in any situation? Find your ultimate strategy by battling the CPU and players all over the country!

Gather character developing resources by using “Masoline”! In Disgaea 7, you will need to use a resource called “Masoline” that can be obtained whenever you clear a stage by yourself to initiate the “auto-battles.”

When challenging a stage you’ve already cleared by auto battle, using the same amount of Masoline as last time will let you clear the level without the battles and obtain experience and loot.

The amount of Masoline will differ according to how many turns it took to clear. If you can tweak the machine edit and members of your army just right, clearing in fewer turns, you can gain a lot of experience points efficiently.

Level up your characters without the hassle while you are busy, and enjoy going through the item realm and story!

Honing your artificial intelligence skills is key to becoming the strongest in the nether realms.

In Disgaea 7, the two new Japanese-esque classes “Maiko” and “Thief” will appear!

A girl who dazzles her opponents with her enchanting dances. She has many devlish abilities such as increasing her damage when attacking a male enemy.

A boy who specializes in finding good treasures. When he is on your side, you can fine rare items even from the shabbiest treasure chests.

A warrior who has a tough body and unyielding will. His strength shines when pushed through hard situations.

A female warrior who possess both might and grace. She specializes in focused blitz tactics utilizing her speed.

A master of martial arts. He specializes in connecting opponents attacks into his own devastating counter blow.

A very serious boy and magic user. His high magical energy enables him to use powerful magic attacks.

A free-willed girl and magic user. She has a laidback personality and can use magic without draining herself too much.

A cleric who punishes himself to use healing powers. He can remove status ailments along with HP when he heals.

A female cleric who heals her damaged allies. She uses even more powerful healing techniques to heal her allies.

A user of dark magic that inflicts misfortune. They follow the dark god of grudges called “Dolvalky.”

An odd warrior who uses magic powers. She combines defensive powers into her attacks. She can adapt to many situations using her sword and magic.