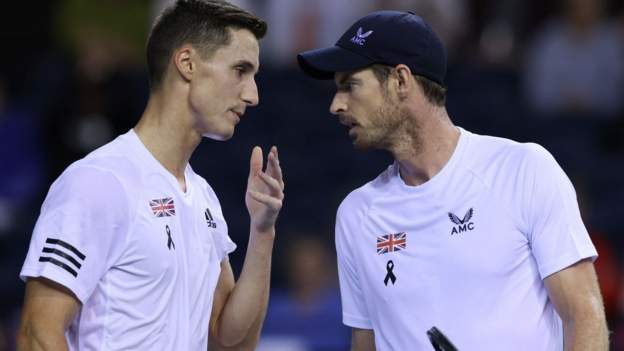 Andy Murray and Joe Salisbury lost a late-night doubles decider as Great Britain were beaten 2-1 by the United States in their Davis Cup group opener.

With the clock approaching 01:00 BST in Glasgow, the pair lost 5-7 6-4 7-5 to Rajeev Ram and Jack Sock to settle an agonisingly close tie.

Briton Cameron Norrie had fought back to beat Taylor Fritz and level the tie after Dan Evans lost to Tommy Paul.

A minute’s silence was held at the start of the tie at Emirates Arena following the death of Queen Elizabeth II and the British players are wearing black armbands or ribbons for their three Group D ties this week.

Great Britain will play the Netherlands on Friday and Kazakhstan on Sunday as they seek one of the two qualifying spots in the group.

Each nation plays two singles matches and one doubles against their group opponents in a best-of-three sets format. There are three other cities hosting groups this week as 16 nations chase places in November’s finals in Malaga.

Murray and Salisbury started their match at 22:00 BST after the previous two matches went to three sets, with Murray saying the late start and subsequent 00:58 finish was “not ideal”.

“There’s probably half of the people in there at the end of the match that were there at the beginning,” the 35-year-old said. “It’s a bit of a shame because, well, they missed a great match.

“It’s not probably because they didn’t want to stay. If you got children here, you can’t stay with them. [If] you’ve got to get a bus or train home, [you] can’t do it.”

Murray and Salisbury raced into a 3-0 lead in the opening set but they then lost three games in a row before making the breakthrough in a lengthy 12th game that went to six deuces, taking the set on their third set point when Sock netted off Murray.

Murray and Salisbury had the advantage that they were playing Salisbury’s regular doubles partner Ram, with whom he had retained the US Open men’s doubles title last week.

But of course that goes both ways and in the second set it was the Americans who found some rhythm.

After going 3-1 down, Sock and Ram only let the Britons take seven more points in the set as they forced a deciding set, which they won with a Ram smash at the net after they had broken to lead 6-5.

There have been six group matches so far this week Glasgow and all have gone to three sets, with play on both days going past midnight.

Former world number one Murray said tennis in general needs to think about the issue of late finishes, saying it was going to be hard for the US team to play again on Thursday against Kazakhstan.

“We’ve seen it obviously at the US Open even just last week,” he added. “It’s something that tennis needs to sort of have a bit of a think about. I don’t think it looks that professional.”

Crowd lifts Norrie but it is not enough

The day had started with a high-quality match between Evans and Paul, which was as close a contest as their world rankings suggested it would be, with the Briton ranked just four places higher than his American opponent Paul at 25th in the world.

Evans was beaten 6-4 4-6 6-4, meaning Norrie knew he had to win his match against Fritz to keep Great Britain in the tie.

Norrie had been out of sorts for much of the match until taking control of a second-set tie-break and riding the momentum to win 2-6 7-6 (7-2) 7-5.

The world number eight had quickly found himself a double break down at 5-1 as the first set ran away from him as he paid the price for 12 unforced errors to his opponent’s four.

An early break in the second enabled Norrie to go 3-0 up but he then gifted Fritz a break with a wild forehand.

With music not being played at the arena as a mark of respect during the national period of mourning, it was up to fans to generate the atmosphere that could fire up Norrie.

The football-style chants and the drums played their part and the Briton then raised his own decibels with a roar as he fended off a break point to hold for 6-5, later carrying the momentum into the tie-break that he dominated before serving out victory following a break in the ninth game of the deciding set.

“Honestly, I owe it all to the crowd. You guys were amazing,” said Norrie, whose dad David is from Glasgow and was in the stands watching.

“I loved the atmosphere.”

Murray and Evans both noted that the lack of music meant the changes of ends were much quieter than usual, with Evans saying “something was missing” and Murray adding “it’s not easy for a crowd to maintain an amazing atmosphere for 10 hours”.

And while the crowd did their best to cheer on Murray and Salisbury well into the night, the dream start to their home group stage was not to be.