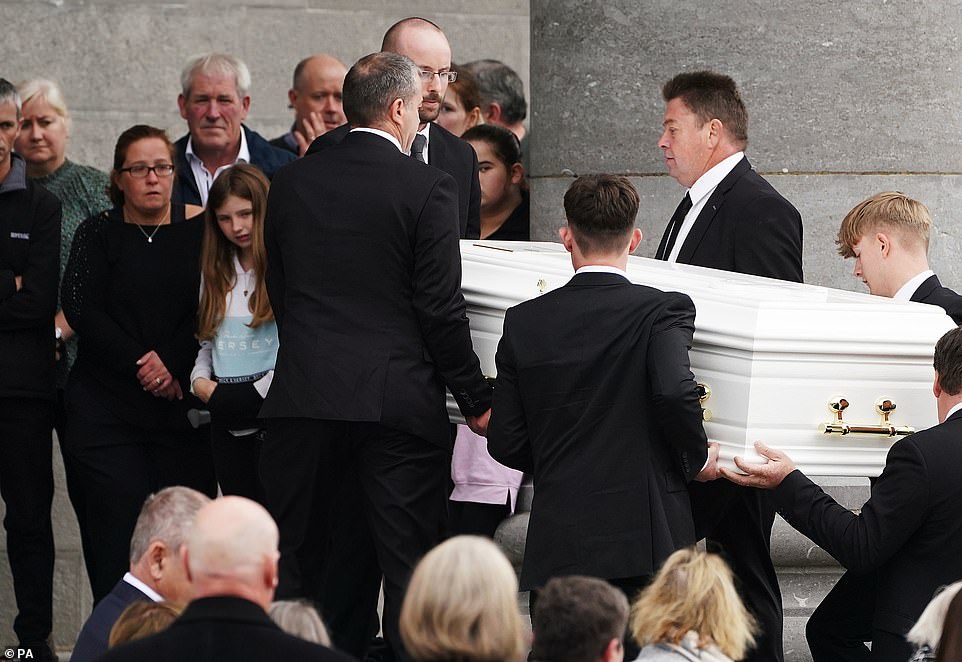 Two Irish children who died in a car fire in Co Westmeath will be buried together in a single coffin after mourners today heard the siblings were ‘inseparable in life’ and would now explore the ‘highways and byways of heaven’ together.

Five-year-old Thelma Dennany and her two-year old brother Mikey Dennany died in a car fire on a rural road at Lacken, Multyfarnham.

Hundreds of people attended the funeral at St Mel’s Cathedral in Longford, ahead of the children’s burial in Cullyfad Cemetery.

One white coffin bearing both the children’s bodies lay at the top of the church as prayers were said for the youngsters’ ‘heartbroken’ parents Micheal Dennany and Lynn Egar and their brother and sister Eddie and Katelyn, as well as extended family and friends.

Garda Commissioner Drew Harris confirmed that the investigation into the fatal fire last Friday is criminal in nature, but police have not released further details.

The car, which had not crashed, was discovered by a truck driver engulfed in flames with the mother and two children inside.

Emergency services airlifted out the mother, who remains in hospital. The fire is being treated as suspected arson. 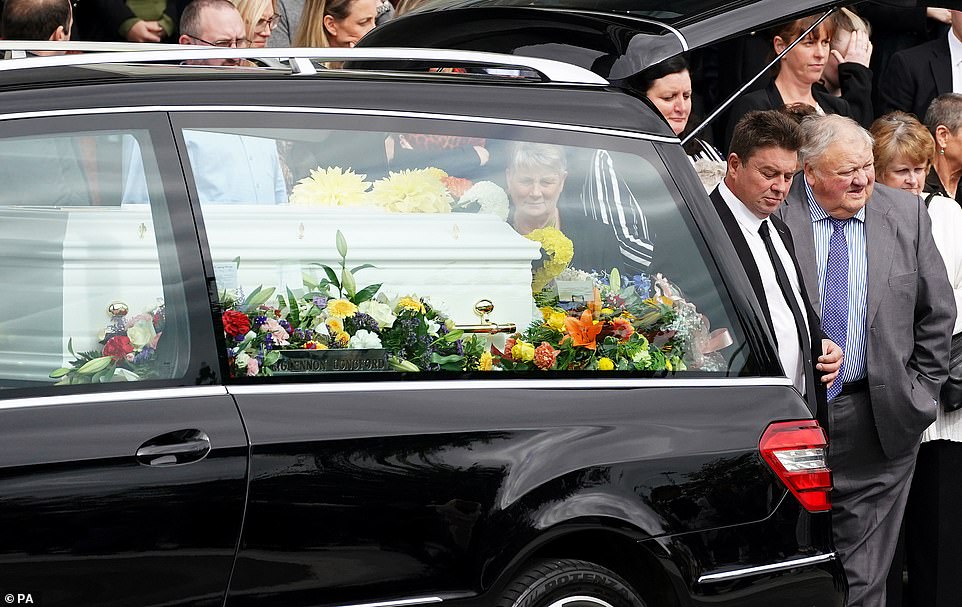 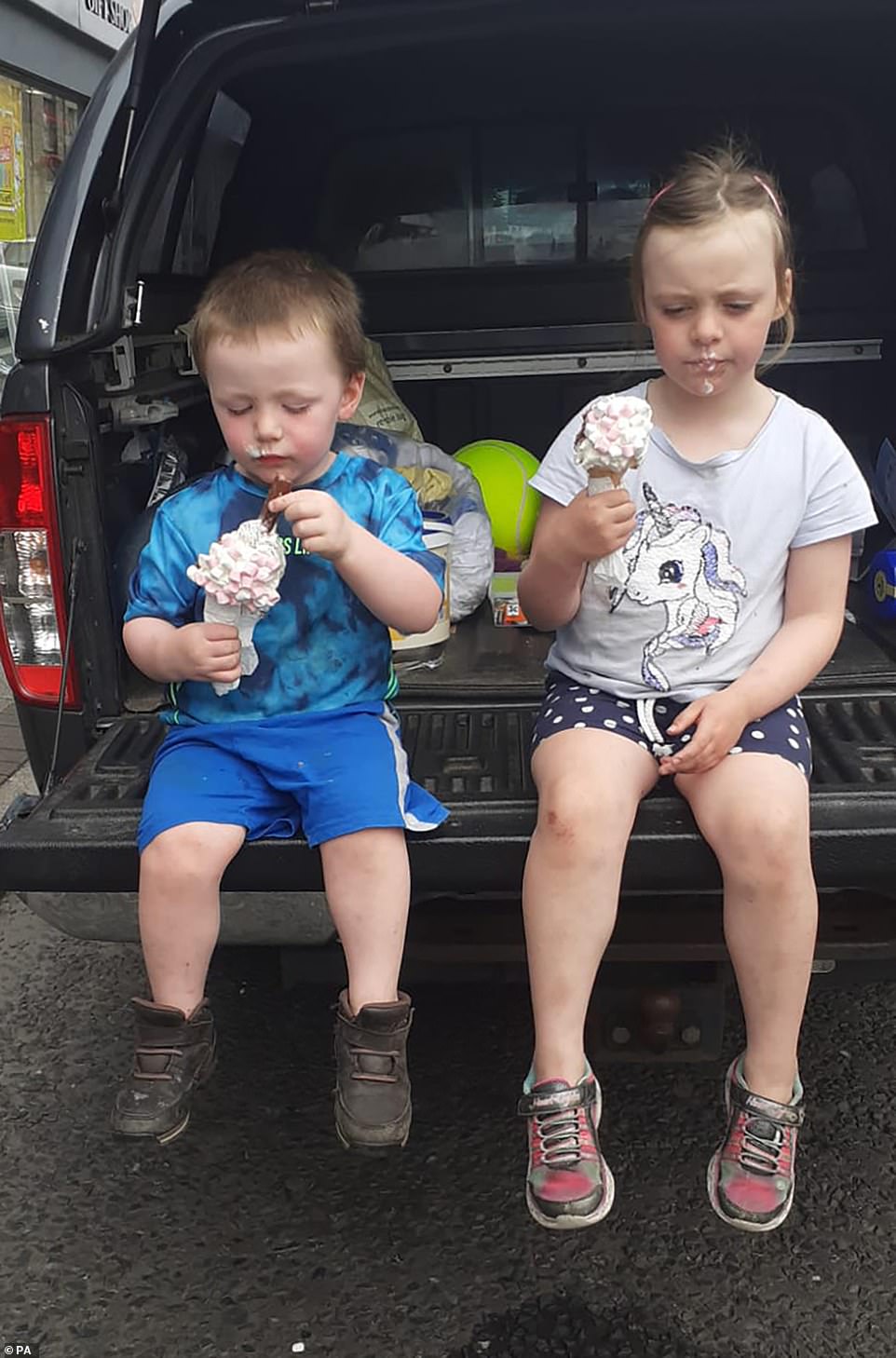 The priest described Thelma, who was a pupil at Saint Cremin’s National School in Multyfarnham, as a ‘lovely girl, always smiling’.

He said her little brother Mikey was enrolled in Toddlers and Waddlers pre-school in Rathowen and that they loved to explore together.

Symbols of their lives were brought to the altar, including artwork and a collage from Thelma’s primary school, artwork by Mikey at his pre-school and their fishing rods.

During the homily, Father Casey said the children’s lives had been ‘tragically cut short’.

‘We gather to thank God for the gift of their lives — lives so tragically cut short in the full bloom and promise of childhood,’ he said.

‘We pray for the comfort and consolation of their grieving parents Michael and Lynn, and for their brother and sister Eddie and Katelyn, all of whom are weighed down by sorrow.

‘We remember their heartbroken grandparents Mary and Herbert, their aunts, uncles, relatives and friends at this time of trauma and distress.’

Father Casey said there was a ‘special place in our hearts’ for the children’s friends in pre-school and school, as well as their minders and teachers.

‘Thelma and Mikey were vibrant children,’ he told mourners.

‘They were inseparable in life. In the words of their dad, Michael, the only thing that separated them was school as they went their separate ways each morning. 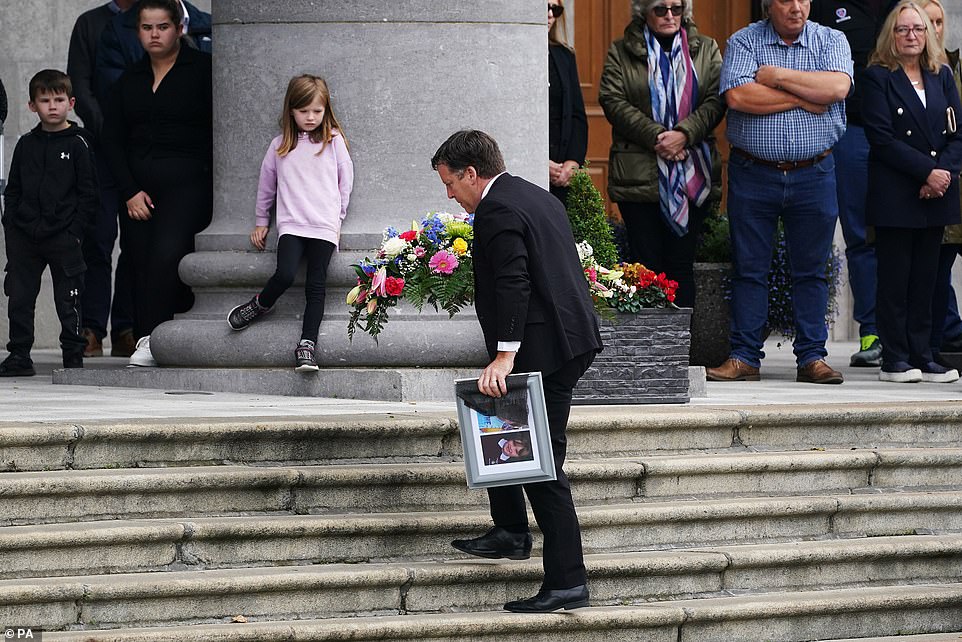 Flowers and photos are brought to St Mel’s Cathedral, Longford, for the funeral mass of Mikey and Thelma Dennany 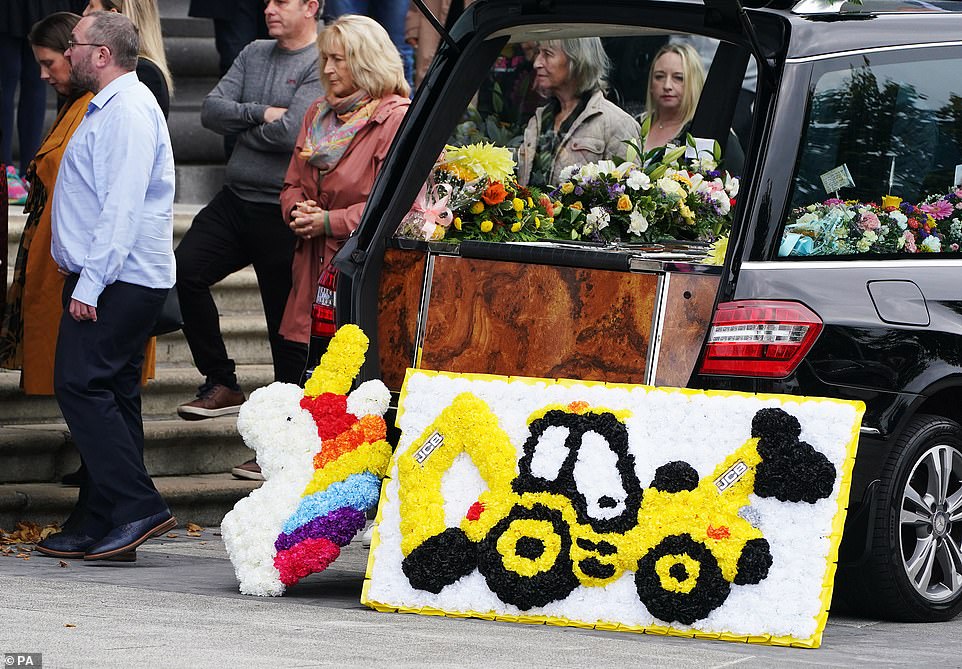 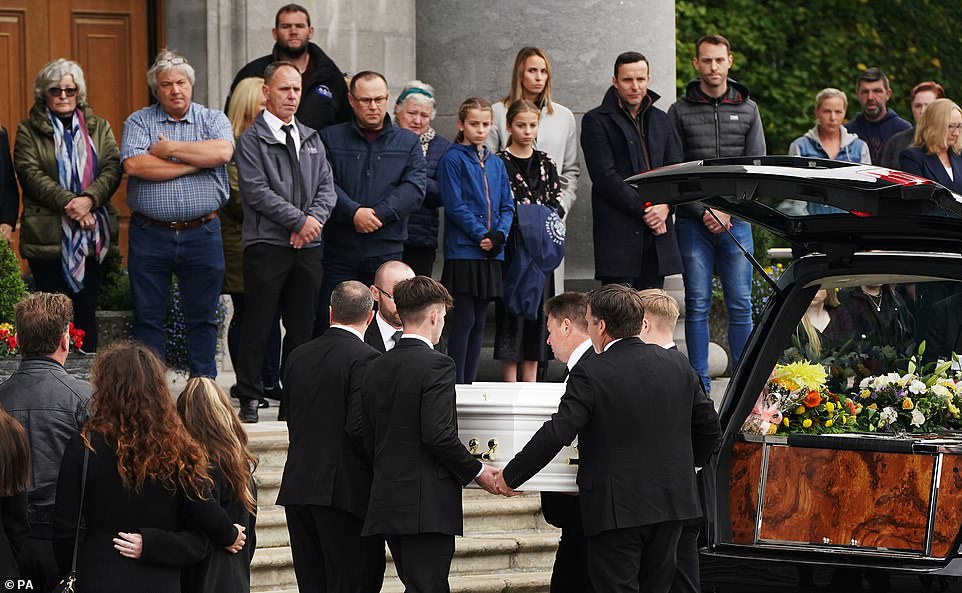 During the homily, Father Casey said the children’s lives had been ‘tragically cut short’ 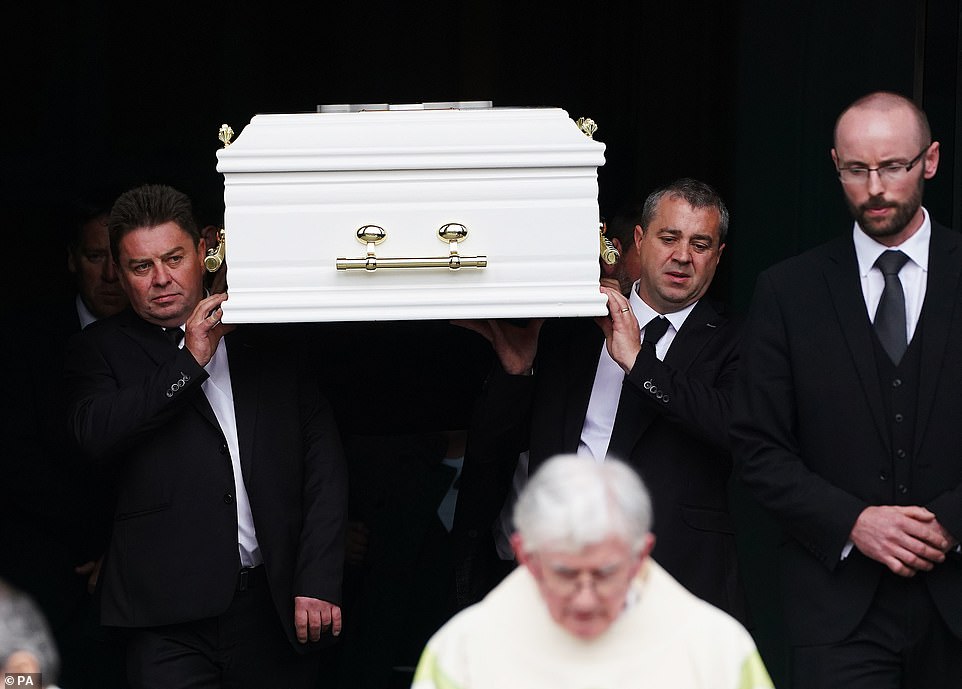 Father Casey said there was a ‘special place in our hearts’ for the children’s friends in pre-school and school, as well as their minders and teachers as the coffin was carried 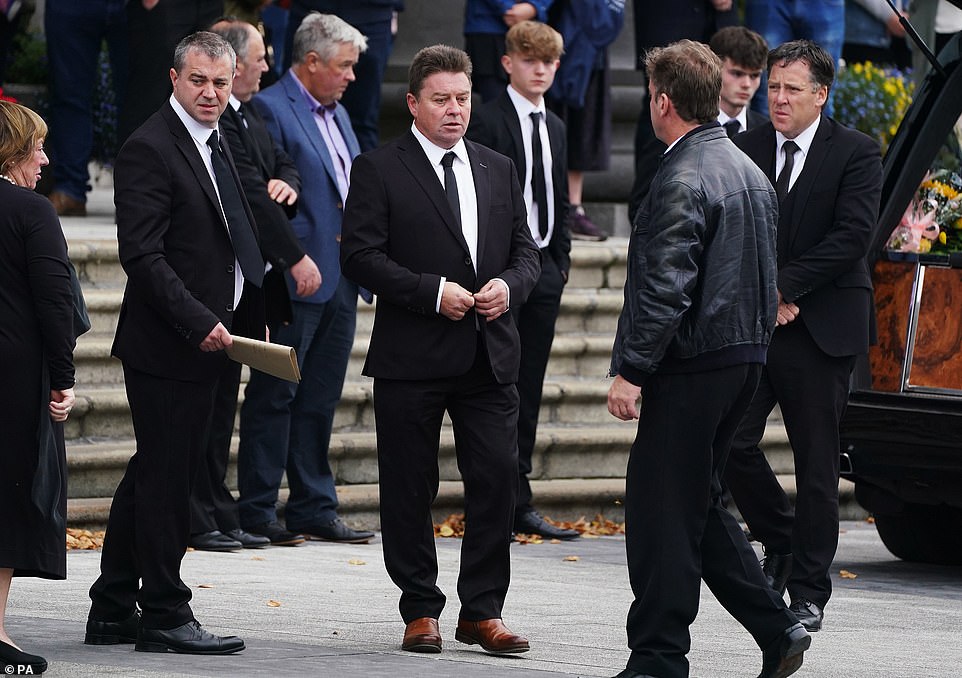 Michael Dennany (centre) arrives at St Mel’s Cathedral, Longford, for the funeral mass of his children. Police said an investigation has been launched into their deaths

‘On Saturday week last, he ventured onto the pitch for the first time to join her in the sport she loved.

‘They loved to run and laugh and feel the wind in their hair and to pick wild flowers. They looked forward to trying out their fishing rods.’

He also told those gathered: ‘We do not know how these tragedies occurred, we do know they were deeply loved.’

Father Casey also read a message from the family, which said: ‘We the family would like to thank everyone for helping us to say farewell to Thelma and Mikey.

‘We say farewell because with the memories they left us through their short lives and their infectious smiles, they will be with us forever.

‘Your heartfelt sympathy and offers of help have touched us greatly at this very difficult time. Once again, we thank you all.’ 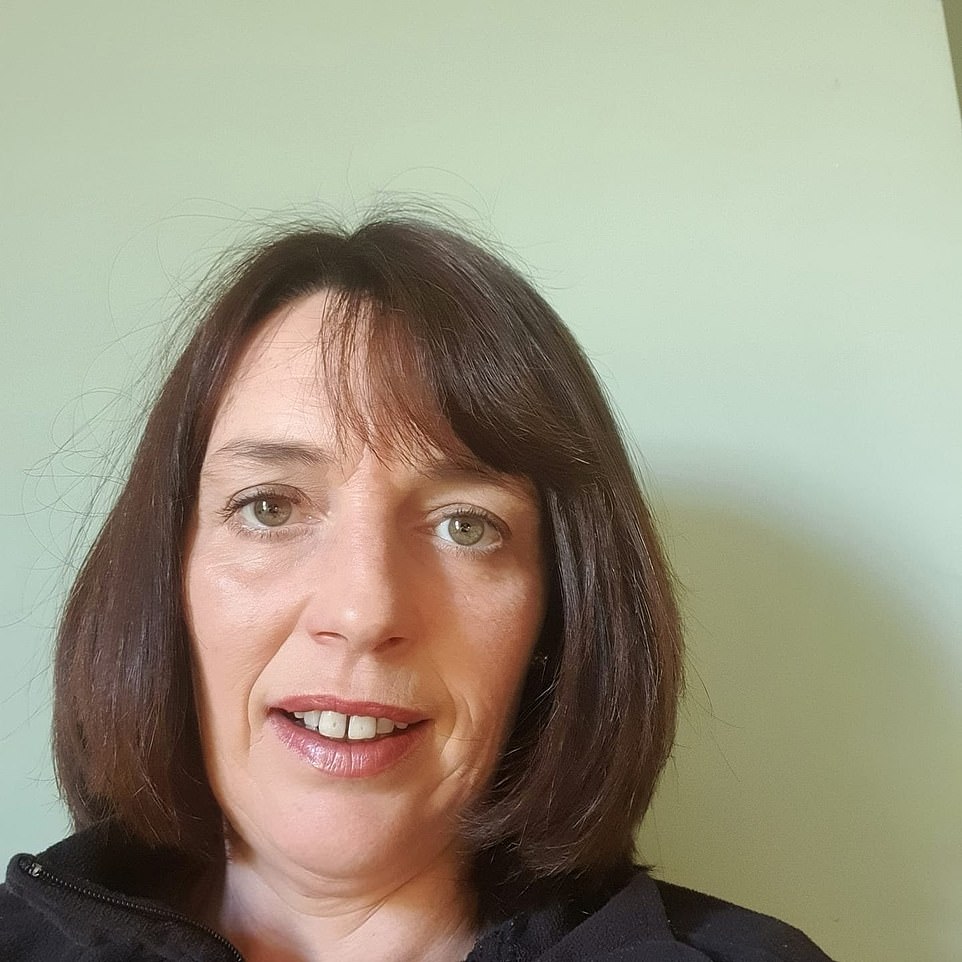 Lynn Egar, aged in her 40s, remains in a hospital after she was pulled by a passer-by from the burning car, which went up in flames while on a rural road at Lacken, Multyfarnham on Friday 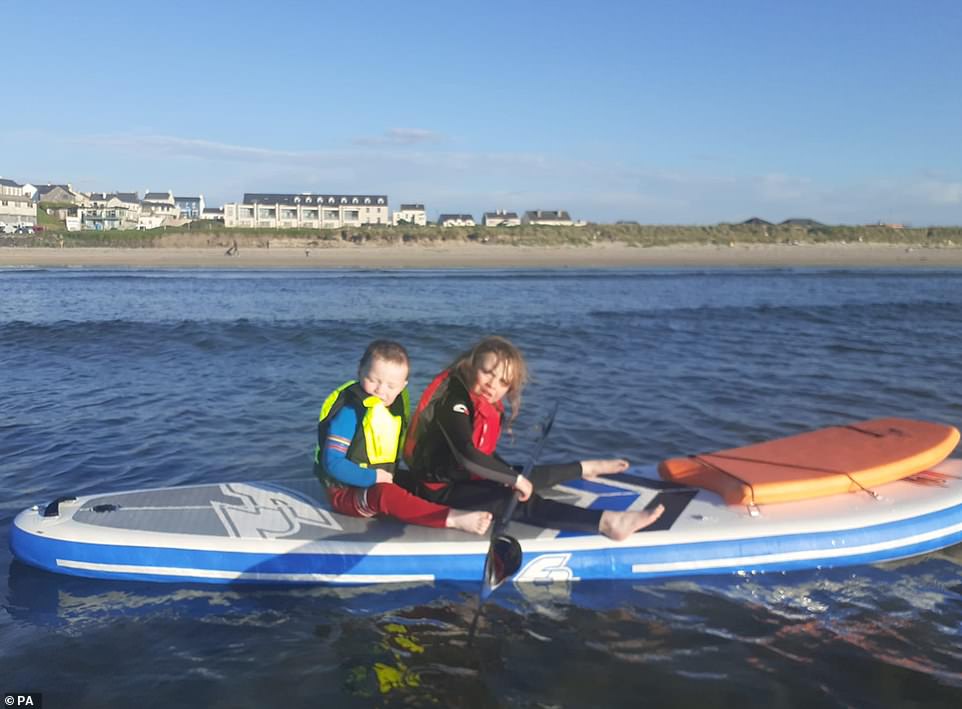 Around 500 people took part in the vigil in the village of Multyfarnham, which was attended by school teachers, parents and children and members of the wider community. Some carried candles and framed pictures of the victims (Thelma pictured right and Michael left)

A criminal investigation into the children’s deaths has been launched by Gardai.

‘We’re regarding [the case] now as a crime investigation,’ Harris said while speaking in Galway last week, according to The Irish Times.

Post-mortem examinations on the bodies of both children by the state pathologist Dr Sally Ann Collis have concluded, but Gardai said they will not release the results for operational reasons.

Ms Egar continues to be treated for serious but non-life threatening injuries in hospital.

Police are hoping she will soon be able to provide information as to how the car became engulfed in flames.

Gardai have appealed to anyone with any information in relation to the incident to contact them. It added that a Garda family liaison officer continues to keep the family updated.

They are still appealing for anyone who was in the Lacken area on Friday between 2pm and 4pm and has any video footage to make it available to the investigation team.

Officers also urged anyone with information to contact Mullingar Garda Station on 044 9384000, or contact the Garda confidential line on 1800 666111 or any Garda station.