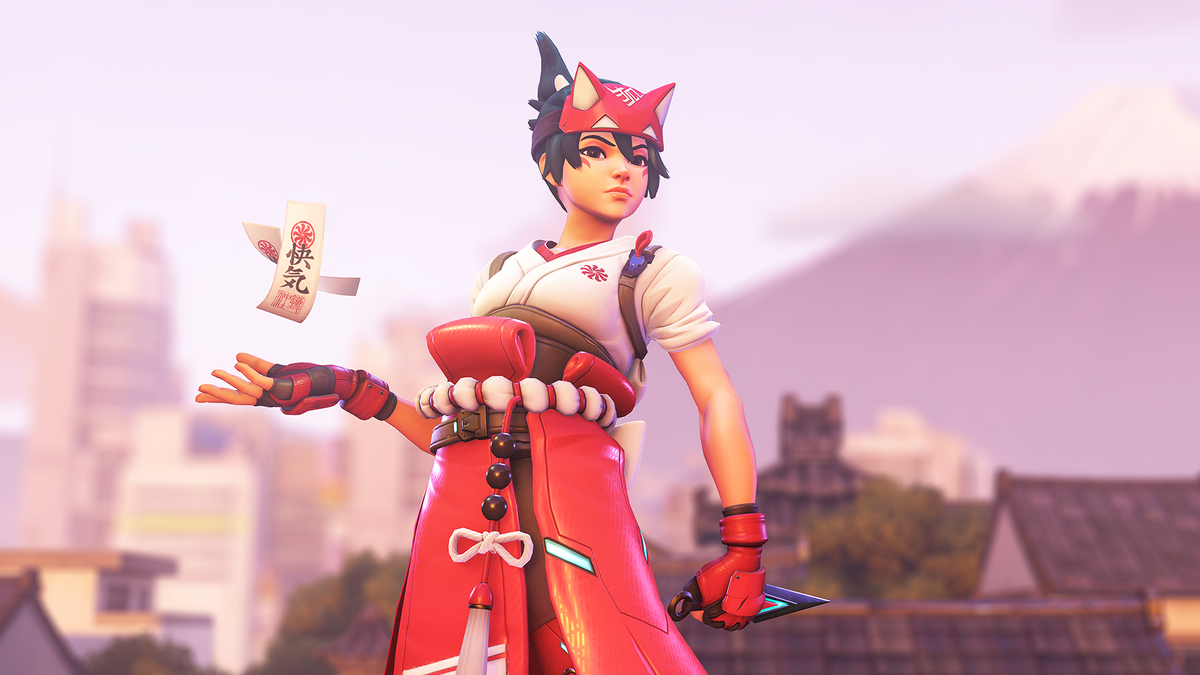 Overwatch 2 (opens in new tab) will lock heroes behind its battle pass, but doing so won’t interfere with the game’s strategic, team-based battles, Blizzard said in a group interview with PC Gamer.

For the last week, Overwatch fans have been outraged (opens in new tab) over a leak and subsequent confirmation from Blizzard VP and commercial leader Jon Spector that future heroes will be unlocked through free battle pass progression. It’s a fundamental change from how heroes are released in the original game (they were immediately free for everyone) and has many fans worried about how it affects the game’s rock-paper-scissors metagame.

Starting with Kiriko (opens in new tab), Overwatch 2’s newest support hero, every new character in the game will be locked behind Tier 55 (opens in new tab) (out of around 80 tiers) of the nine-week (opens in new tab) battle pass. “We do want you to play the game regularly during the season to get there,” Spector said, and added that those “regular players” can get the hero for free “well before the season ends.” Buying the $10 premium battle pass with 1,000 Overwatch Coins (a new currency) will grant instant access to Kiriko. And all new heroes won’t be available in the game’s ranked competitive mode for the first two weeks of each season.

Slightly softening the blow of the new unlock model, Blizzard is giving all Overwatch 1 owners who log in during Season 1 or 2 the premium battle pass for free, which instantly unlocks Kiriko for millions of players, and they get access to Sojourn and Junker Queen too. Non-Overwatch 1 owners have to earn or buy Kiriko themselves, but if they log in during Season 1, they’ll get Sojourn and Junker Queen. After the first two seasons, everyone will have to purchase premium battle passes.

The first two seasons will include a hero each, but future ones will alternate between a new hero and a new map. If you miss one of the heroes you can earn them via hero-specific challenges or purchase them in the game’s shop for Overwatch Coins.

When asked about why Blizzard is putting heroes in the battle pass in the first place, Overwatch general manager Walter Kong said, “Well, heroes are the single most engaging content that we have in the game. And as we designed this model, it seemed to be a very strong fit to put those heroes into our new engagement systems.”

On the gameplay side, game director Aaron Keller didn’t argue that locking heroes to battle passes is better for the player—instead, he offered reasons why it won’t be such a big deal.

Overwatch 2 is designed around the fact that not everyone will own every hero, according to Keller. Keller explained that the game has been tweaked to “reduce the amount of hard counters that Overwatch has,” thus reducing the need to have certain heroes available to counter specific strategies. Blizzard wants players to have “more freedom in what hero they’re choosing for any particular situation.”

Keller gave an example of a common matchup between Cassidy and Tracer and said that, unless the Tracer player was remarkably better than the Cassidy, they would feel forced to swap to another hero. “Going forward, what we’ve done is we’re trying to take some of those really hard rock-paper-scissors interactions out of the game, and replacing them with more player choice,” he said.

This “player choice” existed in the original game via strategic hero swaps, but the sequel consolidates it within the heroes themselves. Overwatch 2’s design seems to elevate every hero’s strengths so that, with a high enough level of skill, they can overcome most obstacles. It’s a crucial change that runs the risk of homogenizing the roster if every hero must be viable for anyone all of the time. Based on my time with Overwatch 2’s betas that worst-case scenario hasn’t quite happened yet, but we probably won’t truly feel the effect of this new unlock model until two or three years from now, when up to 20% of the roster will be locked behind Overwatch Coins. Blizzard now has to ensure that every player has enough heroes to counter any team, forever.

The Overwatch community and Blizzard itself have always upheld hero swapping as a pillar of its design and argued about the efficacy of ‘one-trick’ players who stubbornly stick to a single character, but according to Keller, the reality is that most players don’t swap heroes and instead play only a small number of the ones they’re familiar with. “As the players get to be a higher and higher skill level, that band of heroes they play, it actually narrows because it takes a really long time to get good at a hero to play at that level,” he said.

Keller believes that dedicated Overwatch 2 players won’t mind that heroes won’t be available as long as they can play the heroes they’re most familiar with, and if you play regularly, you’ll unlock new heroes by simply playing the game.

New and returning players hoping to find those favorite heroes to become familiar with in the first place, however, will be locked out until they put in enough time or money—which doesn’t seem particularly pleasant for newcomers in a free-to-play game, but has become the norm in almost every one of Overwatch’s competitors. The speed at which you can progress through the free battle pass and the quality of both the heroes and the cosmetics on it will determine its worth over time.

Overwatch 2 is less than a month away. When it launches on October 4, the original game will completely disappear (opens in new tab). The sequel, despite being built on a game with six years of history behind it, is trying to differentiate itself from what came before. Keller briefly spoke about the original game’s history and the changes Blizzard made that weren’t always universally loved.

“The biggest example that we still hear about sometimes is taking away the huge [resurrect] from Mercy and replacing it with another ultimate ability,” he said. “And we know that not every player agrees with these decisions that we make. And that’s okay, they don’t have to. I just hope that they recognize that the reason we make those decisions is that we all believe what we’re doing is what’s best for the overall game.”

I’m not convinced Blizzard’s reasoning for locking heroes behind a battle pass will satisfy the thousands of players upset that Overwatch 2 is sanding down a strategic pillar of the original game’s design. But, as we’ve seen time and time again with games that launch with unpopular business models (opens in new tab), change is always on the table.

“We’re always trying to make the game better for our players,” Keller said. Overwatch 2’s shift to five-person teams wasn’t an “arbitrary” decision, he said, it was made to fix “issues” Blizzard had with the original game. “And so I understand where players are coming from and we sympathize with all of them, but we just would love to reiterate the point that we take it very seriously. We engage in a lot of discussions on our team, and our highest value is to always be making the game better for the majority of our players.”