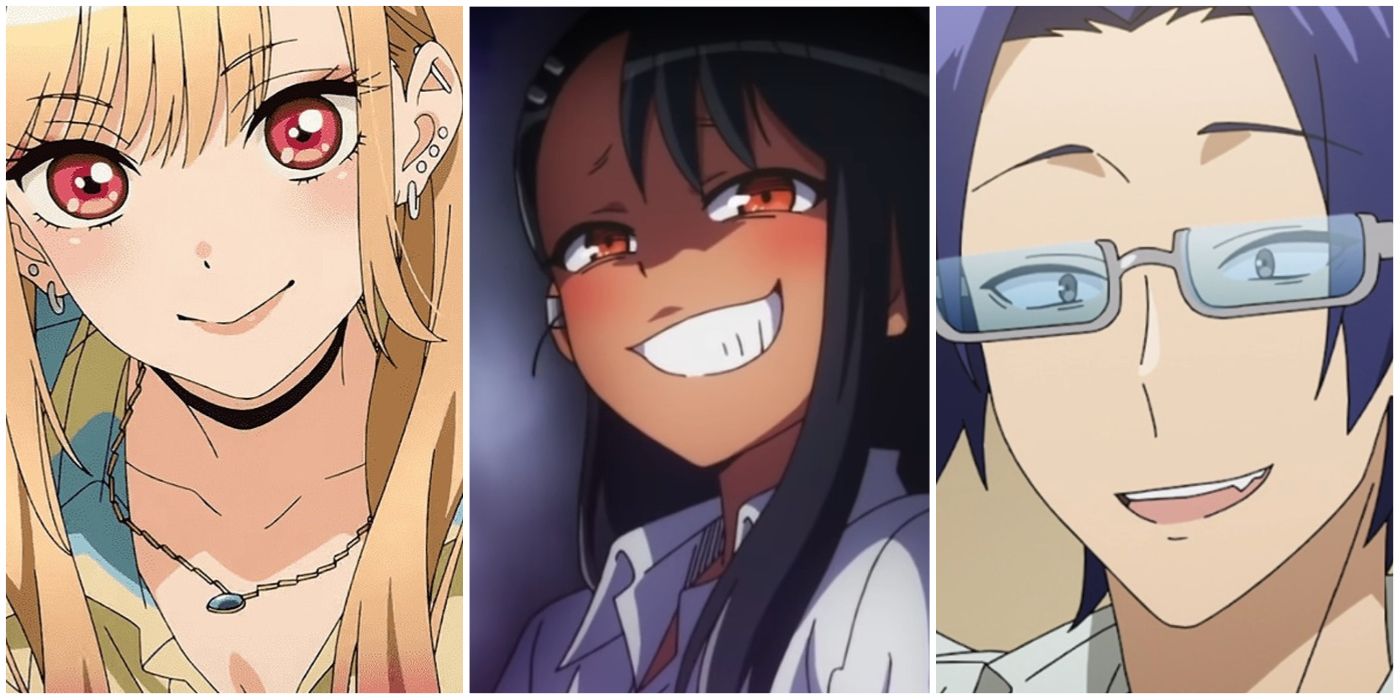 Reality TV is all about the everyday entertainment of watching relatively normal people going about their lives and the drama that inevitably unfolds. As per its title, “reality TV” is meant to chronicle the unscripted and unpredictable lives of ordinary amateur stars. However, even if many reality TV series are in fact scripted after all, the genre’s popularity endures.

In theory, almost anyone could appear on a reality TV show, though an ideal reality TV star would have undeniable charisma, an exciting and unpredictable lifestyle, an active social life, and other means of entertaining viewers with their daily lives. With that in mind, plenty of Japanese anime characters would do well in a reality show, most often slice-of-life characters who aren’t too unrelatable for mainstream reality TV.

10 Hayase Nagatoro Will Say Or Do Anything (Don’t Toy With Me, Ms. Nagatoro!)

The archetypical reality show star is a lively, unpredictable, and creative person who may surprise and entertain reality show fans with their nonstop antics. This means that energetic slice-of-life protagonists like Hayase Nagatoro are perfect for reality TV, even if they don’t have magical girl powers or an exotic pet.

Hayase Nagatoro is a playful, snarky, and obnoxious person with a good heart, always seeking to annoy Naoto Hachioji to process her secret romantic feelings for him. She would make for a relatable, amusing, and sympathetic reality star for sure.

Marin Kitagawa is what’s known as a genki girl, or a cheerful, energetic, and fun-loving young woman who lives her daily life to its fullest. Such characters would make for great reality show stars if the audience is in the mood for someone charming and funny rather than someone wrapped up in serious drama.

Marin is a high school student who is not only popular and talkative but also quite creative. She loves cosplay and everything about it, and as a reality show star, she could demonstrate her advanced cosplaying skill with a variety of colorful costumes. Fans would love to see Marin put together, then put on, all kinds of outfits.

8 Erika Amano Really Lives It Up (A Couple Of Cuckoos)

Erika Amano is yet another lively anime girl who could entertain reality show fans with her colorful personality and her outgoing ways. She is also a fan of cosplay, like Marin Kitagawa, except she has a much bigger budget for it. She is also an Instagram star, allowing her to attract more viewers.

Erika has a glamorous lifestyle that reality TV fans would like to see. She was accidentally adopted by the wealthy Amanos at birth and has been living the rich girl life ever since, complete with dazzling outfits, a vacation home, several dogs, and more.

Toru Kirishima is a gap moe anime character because his tough mobster exterior contrasts sharply with his gentle, soft-spoken true self on the inside. On the one hand, he is a vicious mobster with a reputation, but he is also the caring babysitter of the young Yaeka Sakuragi, the boss’ daughter.

This amusing, wholesome situation is tailor-made for reality TV. In real-time, audiences may watch Toru slowly but surely explore a new side of himself and befriend the young Yaeka while also living the glamorous crime life of a modern Yakuza thug.

Protagonist Shoko Kom is too shy for reality TV and Hitohito Tadano is too plain, but then there’s Najimi Osana, who claims to have millions of friends all over Japan. And it seems true, too, since Najimi can make a few calls to gather a party of hundreds of best buds for an afternoon of fun.

Like Marin and Erika, Najimi is famed for their dazzling, carefree, whimsical lifestyle, and there’s no telling what kind of party or adventure Najimi will have next. Any reality show centered around Najimi will also have plenty of guest stars with Najimi’s countless friends hanging around.

The edutainment anime series Laid-Back Camp is ideal for reality TV in all kinds of ways. Nadeshiko Kagamihara and her friends are likable, sympathetic girls who are practicing the rugged but fun art of camping in the great outdoors, and there is always something new to learn or see.

As a reality star, Nadeshiko would win fans over with her enthusiastic and wholesome personality, and then the adventure may begin. Film crews may record her setting up camp, exploring stunning Japanese natural landmarks, cooking nutritious meals, and more.

4 Mikey Is A Scary But Cool Kid (Tokyo Revengers)

If Mikey and the other officers of the delinquent gang Toman allowed it, then reality film crews could follow Mikey around and get a glimpse of what street punk life in Japan is really like. True crime stories are often popular, after all, and now it’s time for a different flavor of crime life.

Mikey isn’t just a punk. He’s the toughest, funniest, and most respected delinquent of them all, and he’s like a star of this gritty underworld. Reality show fans would be dazzled and terrified by what they saw in the criminal misadventures of Mikey’s daily life as Toman’s leader.

3 Futaba Igarashi Is A Relatable Worker (My Senpai Is Annoying)

At first, it seems a modern office worker would make for a dull reality show star. Fans aren’t in the mood for spreadsheets, board meetings, and idle water cooler chatter. But Futaba Igarashi the petite tsundere is much more entertaining than that as a josei anime star.

Futaba has a good heart, a fierce temper, and a burning desire to prove herself, and she is actually pretty adventurous, too. Her workplace antics are a bit like The Office, and she also has a budding romance with Harumi Takeda that audiences are sure to enjoy watching.

The pink-haired Shikimori is another cheerful young lady in anime who believes that daily life is always an adventure if a person sees the beauty in it all. She is an optimistic, popular, smart, and athletic person who is prone to bouts of heroism, and she also loves competition.

All that should make Shikimori an outstanding high school reality star if characters like Marin or Hayase aren’t available. Reality fans will also like Shikimori because, for all her dazzling strengths, she also has a few sympathetic flaws that viewers can relate to.

If reality TV fans are ready for some R-rated party antics, then Iori Kitahara from the cheerful seinen series Grand Blue is the reality star they need. Iori is a first-year college student who is a good guy deep down, but he also tends to get swept up in beer-soaked, raucous parties with the campus diving club, too.

Iori should amuse fans with his amusing cheating in class, his uproarious parties at the diving club, his awkward attempts to make friends, and some wacky drama between him, his non-biological cousins, his professors, and even his distant little sister, Shiori. There’s no telling what Iori will do, or drink, next.